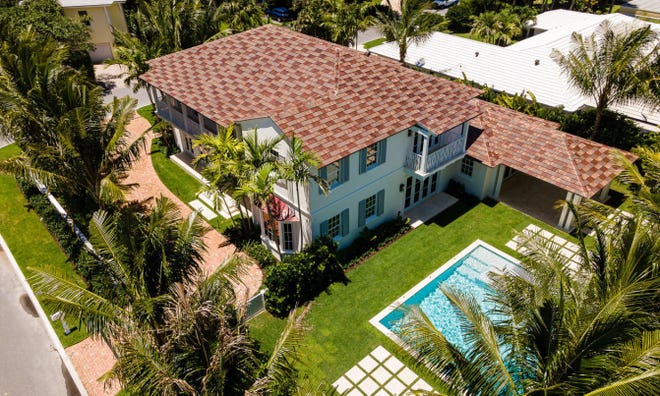 It’s been a bit of a challenge to keep track of the number of never-lived-in houses developed on speculation that have sailed off the market since the coronavirus crisis sent Palm Beach’s real estate industry into overdrive several months ago.

The latest spec project to exit the marketplace was a recently completed four-bedroom house at 1556 N. Ocean Blvd. The house sold for $7.15 million on a far North End lot measuring three-tenths of an acre, according to the deed recorded Wednesday.

The buyers were Kerrie Lance and her husband, Howard Lance, who in 2017 sold their house in the Old Palm Golf Club community in Palm Beach Gardens, property records show.

Howard Lance serves as chairman of the boards of Summit Materials, a Denver firm that services the paving industry, and of Nashville technology firm Change Healthcare, according to a brief online biographical sketch.

He also is a former president and CEO of Colorado-based Maxar Technologies and was previously an executive adviser specializing in private equity at The Blackstone Group, one of the world’s largest investment firms.

The buyers were represented in the sale by agent Bobby Goodnough of Sotheby’s International Realty, according to the local multiple listing service. Goodnough and Angle declined to comment.

The house was developed by Susan Shulman, who manages Pearls of the Palm Beaches LLC, the North Palm Beach-based limited liability company that sold the property. Shulman is married to Ron Pertnoy of Shapiro Pertnoy, the West Palm Beach firm that built the house. The family company is headed by Pertnoy and his cousin, Steven Shapiro.

Shulman has developed a number of Palm Beach spec projects with her husband’s firm over the years, building records show.

The house on North Ocean Boulevard was listed at just under $8 million May 19 and found its buyers quickly, Shulman told the Daily News.

“A week after we listed it, it was under contract,” she said.

The house hit the market about two months after Palm Beach officials issued their first emergency order related to the coronavirus pandemic. Real estate professionals reported an extremely busy summer as residents from other parts of the country sought to rent and buy move-in-ready houses in Palm Beach to use as havens during the pandemic.

The house that just sold stands on the corner of North Ocean Boulevard and Caribbean Road and is the fourth property from the beach.

The two-story layout includes an “open-concept” kitchen adjacent to the family room, along with a library, formal dining room and “gorgeous architectural detailing throughout,” said Angle’s sales listing. It also has an elevator, a full-house generator and a two-car garage.

Interior finishes include detailed ceilings, wood floors and stone elements, including marble. Outside are a covered loggia, a fireplace and a swimming pool with fountains and a sun shelf.

The house was designed by architect Patrick Segraves of SKA Architect + Planner, who has worked with the developer on other projects, Shulman said.

“You can’t skip on quality in Palm Beach,” she added.

The seller bought the property in 2018 for a recorded $2.725 million, property records show.