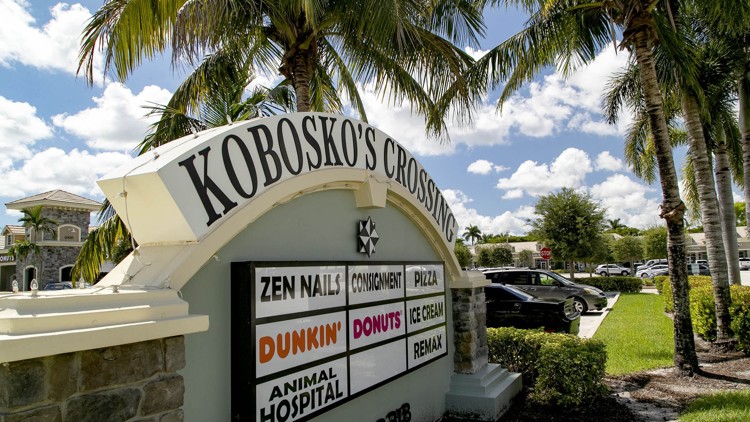 Business is booming at Kobosko’s Crossing.

The Wellington shopping plaza is just over 10 years old, and, thanks to a recently renewed leasing push, is almost full with only one space still available. The former farm stand turned local business hub sits on the south side of Forest Hill Boulevard between State Road 7 and Lyons Road.

Leasing agent Kevin Shapiro of Chancellor Property Group said five new businesses have moved into the bustling center in the past eight months, changes that “completely pivoted the plaza.”

The last open spot, a 3,500-square-foot furnished office space, already has seen interest, he said. He credits that interest to the plaza’s location and Wellington’s “extremely low” office vacancy rate.

Nicole Fuller, owner of the Fired Station, said she chose Kobosko’s for her studio because she was familiar with the area after her family moved to Olympia when she was in high school. “I kind of grew up in that plaza,” she said.

The plaza also offers a central location with which many in the area are familiar, she said. “It’s close to the mall, and everyone knows the intersection of Forest Hill and 441,” she added.

The restaurants provide for foot traffic that, since her store opened Aug. 1, have brought curious shoppers to Fuller’s door. Many are Olympia residents, such as her parents, who have watched eagerly since Fuller painted “Coming Soon” on her studio’s front windows.

“They come in with their ice cream and say, ‘We’ve been waiting for you,’” she said, laughing.

Fuller is using her year of maternity leave from the Palm Beach County School District to get her business off the ground, having delivered her son in May. The timing couldn’t have been better as the space in Kobosko’s became available, she said. “It was just perfect,” she said. “This is a great location.”

The recent changes have made the plaza more female-friendly, said Born2Dress owner Sophia Bornschein. After about a year of serving clients from a storefront on Pierson Road, Bornschein is taking more of a retail approach to her appointment-only boutique.

Her shop, which opens Oct. 20, is designed to feel intimate, like stepping into a friend’s closet to try on clothes. But the time has come to expand and allow walk-in customers, Bornschein said: “It’s gotten to where it’s time for me to grow.”

She chose the spot in Kobosko’s because she has “shopped there forever.” She will take over the space soon to be vacated by the Avon store.

“I try to make it fun … and make it an experience,” Bornschein said. “That’s kind of what makes this new location so exciting: I get to try something new.