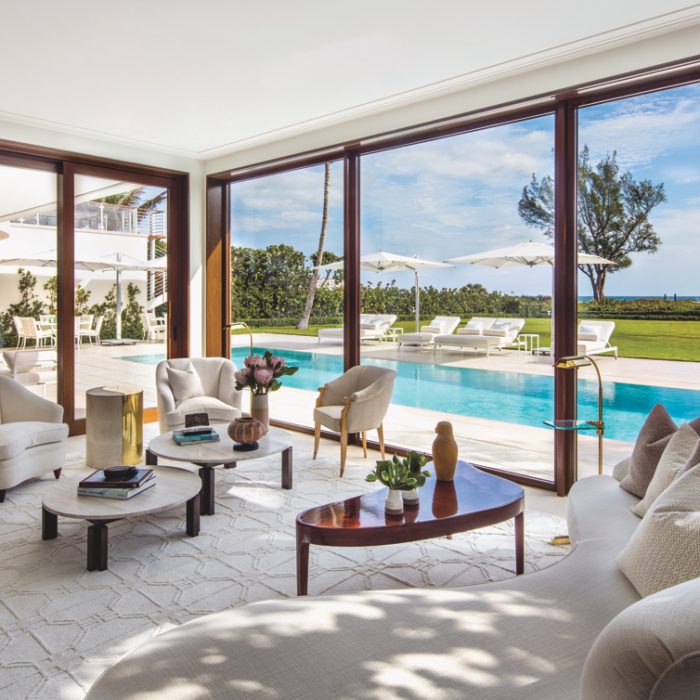 From LuxeDaily:
Relationships are always about compromise, especially in marriage. Yet, when purchasing a home situated on one of the most picturesque and private settings in Palm Beach, compromise was hardly an issue for a local newlywed couple. Both fell in love with the stunning views and superb location, however the property’s original dwelling left much to be desired and was due for a major overhaul. Built in 1989, its dated and suboptimal design–for example, a massive chimney in the living room obscured the view of the ocean–belied its stunning location.

The clients, who together brought four adult children and three grandchildren to their new marriage, hired designer Caroline Rafferty and architect Daniel Kahan to transform the claustrophobic structure into a modern family beach house, where the gorgeous ocean vistas were unobstructed. Most importantly, the home had to be family-friendly. “They wanted a place where everyone could hang out together comfortably,” says Rafferty.

Due to strict zoning code restrictions, Kahan quickly realized a complete demolition was out of the question. “We had to figure out a way to renovate within the confines of the existing building,” he says. “Essentially, we would have to create an entirely new house within the current footprint.” As if that were not a challenge enough, the team was working under the added pressure of a tight deadline: The couple wanted the home to be ready in time to host 50 guests for a family holiday.

Collaborating with builder Josh Pertnoy, they began the ambitious work of removing the four exterior walls, while keeping the roof in place. “The clients basically wanted to live in a big fishbowl with as much glass as possible,” says Pertnoy, who erected pale Portuguese limestone walls punctuated with mahogany-framed glass windows and doors, creating a seamless blend between the outdoors and in.

Kahan also conceived a new, airier look for the interior, drawing inspiration from French Art Deco buildings, furniture and even boats, and Rafferty was on the same page when it came to the decor. “I was really inspired by the look of 1920s modern seaside homes in the south of France,” says the designer. Still, the clients’ preferences were, of course, paramount. “When people ask if I have a particular style, I always say my style is my version of what the client desires,” says Rafferty. “I always begin a project by sitting and listening to what my client likes and doesn’t like, how they want to live and what’s most important to them.”

Because the wife, a doctor of Egyptology, preferred comfortable, traditional designs while the husband, a Tony award-winning Broadway producer, favored cooler, contemporary styles, the unanimous consensus was to go for a modern look with soft, classic touches. Kahan added subtle shadow lines and moldings, while Rafferty layered in relaxed fabrics and textures–chenilles, velvets, linens and alpacas–that make the home feel warm and inviting.

For many of the furnishings, Rafferty traveled to Paris with the wife, returning to Palm Beach with a plethora of vintage and modern treasures by the likes of Audoux-Minet, Rene Prou, Gio Ponti and Andre Arbus. She also incorporated much of the couple’s existing art collection, ranging from contemporary works by Roy Lichtenstein and Andy Warhol to ancient antiquities from China,
Egypt, Cambodia and Greece.

Acting as a subtle influence throughout, the ocean remains the home’s main attraction. In the living room, Rafferty opted out of installing window treatments, letting the wall of glass overlooking the water speak for itself. And in the bedroom, a hand-embroidered upholstered headboard and curtains with a wave-like motif were chosen, while Kahan lined the roof with glazed white ceramic tiles with a similar undulation.

Outside, landscape architect Keith Williams felt it was important to play off the new home’s crisp design. “I wanted to work with the architecture and make the surroundings feel clean and modern,” he says. “Also, the ocean is a very tough environment where very few kinds of vegetation will do well.” So, Williams kept things minimal and natural, mixing green island ficus with coconut palms and sea oat grasses. The understated landscaping allows the family to enjoy unhindered views from their pool area, which Rafferty furnished with custom-designed sofas and chaises from McKinnon and Harris. “We kept the palette mostly white so as not to distract from the ocean,” says the designer. “The only pops of color we added outside are in the throw pillows.”

Designing the home turned out to be one of Rafferty’s favorite projects. “It was a joy to work on because the team collaborated so well together, and the clients were so responsive and open to new ideas,” says Rafferty. And in the end, despite the zoning challenges and time restraints, the residence was ready to debut its dramatic makeover just in time–the holiday went off without a hitch and devoid of any compromises.