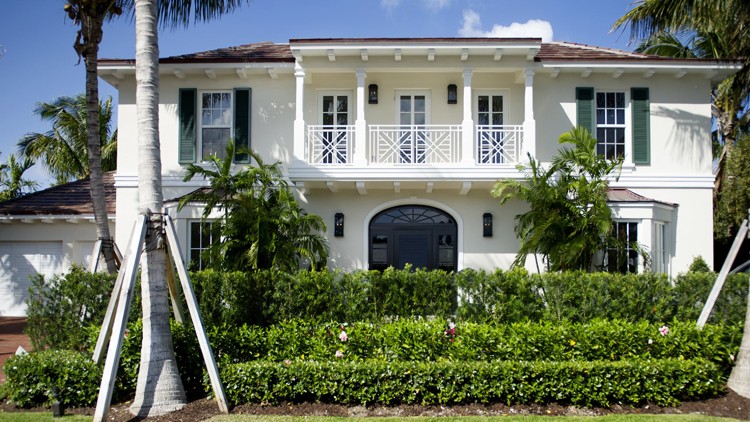 Four more single-family houses priced between $6 million and $10 million in Palm Beach landed under contract this week, boosting evidence that the bottleneck holding back sales over the past year may finally be easing.

In all, 24 houses can be found in the “sales pending” category of the Palm Beach Board of Realtors Multiple Listing Service , according to a search this week. Those listings range in price from $1.495 million to $22 million.

A similar search three weeks ago showed just 16 houses in the pending category.

The four latest properties under contract in the $6-10 million range include two brand-new homes developed on speculation and two older ones. Of the latter, a traditional-style four-bedroom house at 350 El Brillo Way stands on one of the prime “El” streets in the Estate Section; the others are El Bravo Way and El Vedado.

Built in 1950 with 7,446 total square feet, the house on El Brillo carries a price of $9.8 million and has been listed for about a year by Sotheby’s International Realty agent Tina Roberts, who is also known as Christine Gibbons. The property is owned by a trust in the name of Barron G. Collier II, courthouse records show. Collier shared the house with his late wife, Theresa Ann “Tami” Collier, who died in 2015.

Brown Harris Stevens agents Liza Pulitzer and A. Whitney McGurk barely had time to record the MLS paperwork for their Estate Section listing of 220 Jungle Road before it went under contract. They listed the house at $7.95 million on Feb. 10 and had it under contract less than two weeks later. Designed in 1935 by noted society architect Maurice Fatio’s firm, the house has four bedrooms and 4,822 total square feet. It was the longtime home of the late Patricia Sovereign Gates Norris, who died in February 2016.

Of the two spec properties in the quartet, both are on the North End. The one at 257 Sandpiper Drive is a just-finished, four-bedroom, 5,080-square-foot house developed by Gary Purucker and Patrick Marrano of Purucker & Marrano Custom Homes. Corcoran Group agents Craig and Heather Bretzlaff, who is Purucker’s daughter, have the house priced at $6.7 million.

She describes it as a “classic Bermuda” with an “open floor plan, volume ceilings, extensive millwork and a rear-entry garage.” The interiors were finished and furnished by McCann Design Group, the studio run by interior designer Palm Beacher Sara McCann, who also owns the Hive home-furnishings boutique in West Palm Beach.

About a half-mile north at 1233 N. Ocean Way, developer Rene Alonso has just put the final touches on his four-bedroom, 5,348-square-foot house. It entered MLS at the tail end of January at $6.295 million and found its buyer shortly thereafter, reports listing broker Bill Yahn of the Corcoran Group. The landlocked Colonial-style house has an unusual feature: deeded beach access via its own 10-foot ocean parcel.

The four properties join 253 Jamaica Lane, another never-lived-in North End house that went under contract Feb. 10 in the same price range. Broker Christian J. Angle of Christian Angle Real Estate has the four-bedroom Colonial-style spec house, developed by Shapiro Pertnoy Cos. , listed at $6.575 million. It has 5,404 square feet of living space, inside and out.

“These newly listed houses are trading at prices consistent with other new house sales we’ve had recently,” Yahn said. “They’re not being discounted. It shows strength in the market.”