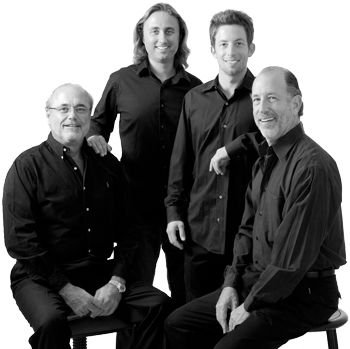 Wellington, FL – February 23, 2012 – Longtime Palm Beach County developers, Steven Shapiro and Ronnie Pertnoy established the basis for their luxury homebuilding business from an unconventional place, their fathers’ haberdashery business. From the start, the cousins learned to always put the customer first and provide the “finest” product for the best possible value, a philosophy that has helped mold Shapiro-Pertnoy Companies into the reputable business it is today. The successful pair partnered with their sons, Josh Pertnoy and Kevin Shapiro, to create the now two-generation Shapiro-Pertnoy Companies—flourishing with the family mindset as it continues to expand and leave its footprint across the Palm Beaches and Wellington. Each of the four partners of Shapiro-Pertnoy has a unique responsibility within the company. It is through their extensive knowledge within their respective areas that clients are provided with the most comprehensive information, choices and recommendations, making the homebuilding business nothing short of fun.

Shapiro learned at an early age the importance of growing a business through sustaining strong open relationships with customers. Although the cousins operated a hippie boutique in Miami in the 1970’s, each partner went their separate way for an interval of time. Ronnie found his niche in the construction industry, and Steven discovered the creativity and passion behind the film industry. When the pair found their way back to one another after walking their own paths, the philosophy that had been instilled in them from their fathers overlapped into their everyday lives—they always strived to be the best. Whether it was their once popular hippie boutique or their now highly regarded luxury homebuilding business, they wanted nothing more than to achieve the best and have the reputation that would follow suit.

“When I went off to boarding school in Massachusetts, I had always thought of myself as a better student and athlete than most,” Shapiro stated. “What I learned during my time there was that success was something that didn’t always come naturally. I had to work really hard to keep up with the other more talented students and athletes, a real surprise and life-changer. My time at boarding school became an essential lesson that acted as a steppingstone in both my personal and business life. You have to work hard. It is something both Ronnie and I have abided by for the succeeding four decades.”

When Shapiro graduated college, he pursued a career using his film degree. He used the same attitude to encourage partners and employees to be the best in the industry, helping build the fledgling film business into one of the most successful south of New York. When he and Pertnoy collaborated 34 years ago to create the Shapiro-Pertnoy Companies, it was his knowledge of sales, marketing and operations that helped to push the business to the forefront of homebuilding.

“Many of our competitors during our first few years in Wellington were carpenters first and worked their way up the ladder to become homebuilders,” Shapiro explained. “We came with a completely different vantage point, that of the client. While other builders were trying to maximize their profitability by doing things as cost effectively as possible, we were trying to build homes, make them last and keep our clients informed and happy during the process. We could build a home that would require less maintenance, could withstand nature and time, and offer a finer product.”

Although it was Pertnoy’s background that enabled him to focus more on construction, having worked for several years with construction companies prior to the establishment of Shapiro-Pertnoy, Shapiro would not let his lack of knowledge inhibit his performance in the sales and marketing department of the new company. Having worked for a real estate broker and a developer while in college, Shapiro definitely was not going blindly into the field; however, he soaked up as much knowledge as he could through books, magazines, classes and spending time in the field. He eventually received a contractor’s license, discovered he had a great sense for home design, and combined with his marketing and administration skills, helped the Shapiro-Pertnoy Companies become an unstoppable force. By 1981, they were developing and building a 63-home community, and beginning to expand into commercial building and development.

Shapiro has always acted as a customer liaison during the construction process for both homebuilding and commercial properties. He works closely with his partners Josh, Ronnie and Kevin on design and budgets for new commercial properties, and plays a big role in the design of residential and commercial projects that the company builds speculatively. In their early years, both Shapiro and Pertnoy handled existing and prospective tenants within the retail space, industrial park and office space on a daily basis. As their tenants grew well into the thousands, Shapiro-Pertnoy brought in middle management, who dealt directly with the clients. But after 1991, the pair decided that it was their one-on-one nature that kept them successful, so they refashioned themselves to what had originally brought them success—focusing on the customer relationships with their homebuilding clients and prospective homebuilding clients.

“We slowed things down a bit during the recession, building the company into something far more manageable, something where we were able to devote our time to our residential customers and a smaller group of commercial clients,” Shapiro said. “Communication is possibly the most important part of the homebuilding process. With the help of our sons, we have gained an overwhelming amount of insight into new technologies and markets, taking the Shapiro-Pertnoy Companies to an entirely new level. Reputation does mean something, and we have been very blessed to be a part of Palm Beach County’s growth over the last 34 years, and to still maintain the exceptional standing we gained as one of Wellington’s original builders.”