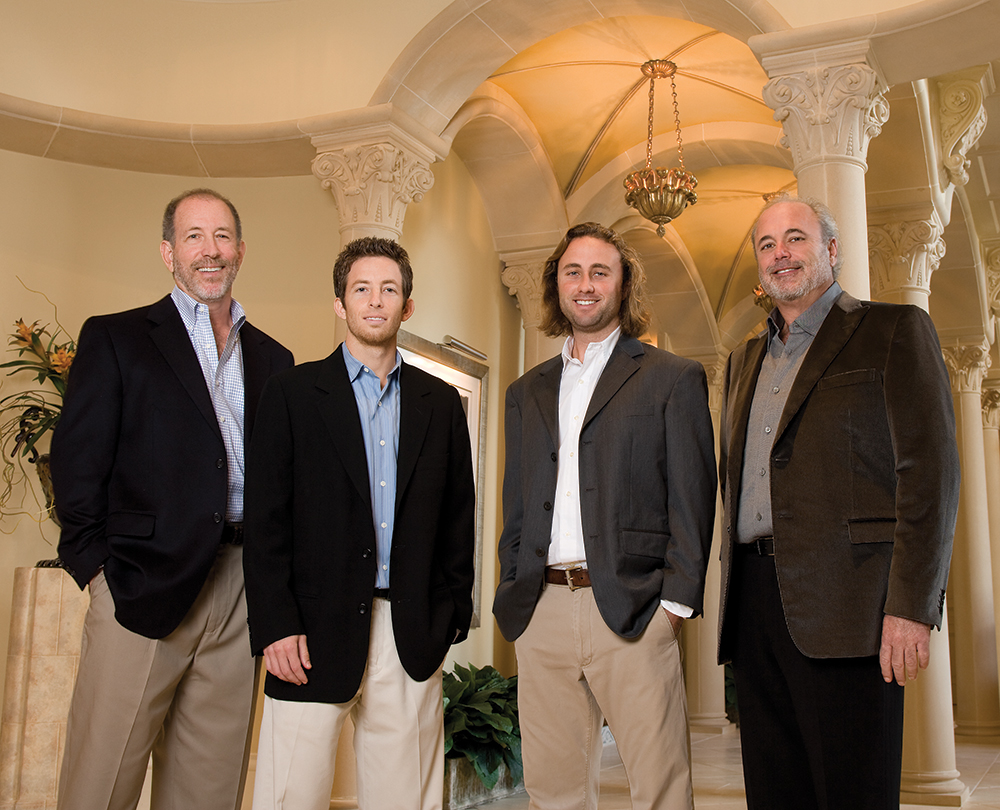 Wellington, FL – February 2, 2012 – It all began when an uncle and nephew from Baltimore made the life-changing decision to move to Miami, FL, to launch a clothing business and firmly plant their South Florida roots—the impact of the move paved the way for the future of the West Palm Beach based Shapiro-Pertnoy Companies. Their sons, Steven Shapiro and Ronnie Pertnoy, had the opportunity to grow up as rare and true Floridians.

Steven and Ronnie worked for their fathers for several years and eventually conceived and managed a hippie retail store called the “Other Half” where they developed their business philosophy that is reflected in the everyday work of the Shapiro-Pertnoy Companies. The pair worked together to always strive for customer satisfaction. Whether it was creating innovative marketing tools, designing vibrant mannequins or offering the best value, the cousins’ time together gave them the tools to build the future for their Palm Beach County custom homebuilding company.
Although Steven and Ronnie took separate paths for a period of time, the cousins came together in the late 1970s to form what is now the highly esteemed Shapiro-Pertnoy Companies. Over the last 34 years, the Shapiro-Pertnoy Companies has achieved the highest level of success in not only custom luxury home building, but also in the development of commercial properties. The Shapiro-Pertnoy Companies consists of 17 employees and a number of other companies that do a variety of tasks. The main components of Shapiro-Pertnoy are two-fold: custom homebuilding, and development, leasing and management of commercial properties.

“We were the first single-family builder in the Polo Club in Wellington,” Ronnie explained. “We have gone through multiple phases including grasping the early growth of Palm Beach County in both its residential and commercial aspects. We realized the how fast-growing Palm Beach County was, and we were fortunate enough to be able to grow with it.”

In 1982, Steven and Ronnie built the first industrial park in Wellington, FL. At the time, Pierson Road was zoned as a future industrial site, but it was the inventiveness of the Shapiro-Pertnoy Companies that put the concept into motion. “We stood out there with our investors looking at the numerous Chinese pepper plants covering the land, needless to say, they laughed at us,” Steven elaborated. “We decided to pursue the idea anyway, and it turned out great.”

The cousins saw the ebb and flow of the real estate market with much insight due to their time spent living locally and building within Wellington. Their diversification in the homebuilding and commercial markets allowed for the team to make it through recessionary times by relying on what they knew. In the mid-1980s they pursued projects in the northern part of Palm Beach County, continuing to expand their reach and reputation in the community.

Both Steven’s son Kevin and Ronnie’s son Josh are following the same path that began in Miami many years ago—learning from and working alongside their fathers, continuing the future of the Shapiro-Pertnoy Companies into the next generation. Cumulatively, this creates two generations of Floridians and over 60 years of family business knowledge.

As Palm Beach County continues to grow, with Wellington at the forefront of this expansion, the Shapiro-Pertnoy companies look forward to the innovations and developments that will occur in the county they call home. The Shapiro-Pertnoy Companies will continue to do what they do best—look at the big picture.